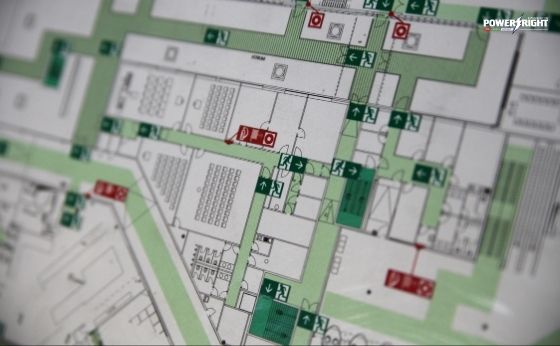 Every house or business owner should be ready for an emergency, such as a carbon monoxide leak, fire, earthquake and so on. To ensure the most efficient and the safest evacuation of all the residents, employees or visitors of a building one has to develop an emergency evacuation plan.

First of all, an evacuation plan describes how to exit a structure during an emergency. Every member of your staff should know several ways to exit the building, a safe meeting point outside the building.

There are some essential elements to include when planning your evacuation:

Depending on your risk assessment or other fire precautions you have, you need to choose how you will arrange the evacuation of the premises. There can be simultaneous, phased and silent alarm evacuation.

This strategy is preferable for larger commercial buildings and complexes. Usually, the process starts with evacuating the floor where the fire is and the floor above. Then, to avoid congestion, other floors are evacuated one by one.

In hospitals and care homes, every floor might be divided into several compartments. In case of a fire, the occupants can be moved from a fire-affected compartment to the next one. This type of evacuation requires much more time and, thus, other fire precautions, such as voice alarm systems and sprinklers.

In general, companies are recommended to have four roles covered: point of contact, coordinator, head counter and first-aider.

Evacuation plan lets the staff know where to go after leaving the premises by following the emergency exits sings. It is necessary to stay together after the evacuation because it helps head counters to get an account of every employee or visitor who should have left the building.

Planned and Mapped Routes and Signs

A good fire evacuation plan for a commercial building should include primary and secondary escape routes. Mark all the exit routes, make several written evacuation plans for a bigger office and post them, so your workers and clients know the evacuation routes.

In such premises as hospital, school and shopping centre, you may need to nominate several coordinators in advance, so that they could assist customers or patients in case of emergency.

What kind of fire protection systems are available? Are your employees instructed on how to use them and what to expect?

There are many solutions from a foam fire suppression system to a sprinkler system, but the most basic and most forgotten are fire extinguishers.

Check if other fire protection solutions at the site are up-to-date and operable:

In any premises, especially where visitors and people are not familiar with the layout of the building, there should be tools to identify the key escape routes. Such means include schematic drawings and emergency exit signs.

Once you are ready with your plan, make sure to ‘drill’ different possible emergency scenarios.

Regular rehearsals minimize confusion and panic during a real emergency. It is recommended to perform a full rehearsal of the company evacuation plan at least annually.

Whatever emergency happens, the first decision to make is whether the employees, occupants and visitors should stay inside or leave the building. Dangers that happen inside the building, from a chemical spill to fire, require an evacuation. Most of the time these events cause panic and confusion.

The only way to provide a timely and safe evacuation and prevent panic is to have a well-defined and well-practiced evacuation plan. A solid evacuation plan should include several elements, such as an appropriate evacuation strategy depending on the promises and type of emergency, a set of emergency roles, primary and secondary escape routes, reliable emergency equipment and ready-to-act employees.