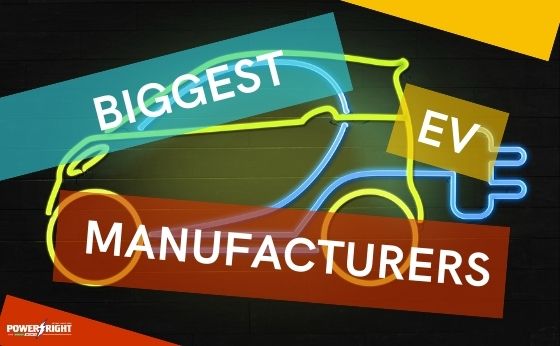 Global analysts predict that by 2030 electric vehicles will outsell the conventional ones. Soon it might become cheaper or comparable to buy and operate electric cars, as opposed to internal combustion engine vehicles.

Having an EV car means spending less money on servicing and maintaining it. Moreover, they are better for the environment as they do have zero exhaust pollution and can use renewable energy to charge.

The main driving factor for the fast adoption of such technology is the advancements in new EV car models by leading manufacturers. In this post, we will look at the best EV manufacturers in the world.

Tesla is probably the best known electric vehicle company, based in the US and headed by Elon Musk. It was founded in July 2003 to prove that EVs are fun, fast, and more convenient to drive than gasoline cars. Tesla strives to create a future with no fossil fuel dependency and zero-emission.

Globally, Tesla stands in the first position in the first half of the year 2020. With 179,050 units sold, this EV manufacturer makes up 28% of the market share.

There is high consumer demand for Tesla's cars due to their innovative technology, modern design, and high performance. The price for Tesla’s base variant of Model 3 is €28,500 (and about €63,000 for the most expensive Model X).

Renault/Nissan is a French-Japanese group formed by Renault (based in France), Nissan and Mitsubishi Motors (based in Japan). Together they sell more than 1 in 9 vehicles worldwide.

Models of electric vehicles by the alliance, for example, the iconic Nissan Leaf and Renault Zoe, are created to have a decent range with zero-emission. Their cars are designed for the mass market. Their cars are responsive, quiet, and smooth with stable handling.

In terms of global sales, Renault/Nissan stands in the second position in the first half of the year 2020, 65,521 units were sold (10% off market share).

VW is a German car manufacturer founded in Berlin in 1937. Volkswagen offers two EV models: the e-up! and e-Golf. The company’s goal is to produce 50 electric cars by 2025. To achieve this goal, VW will invest over €30bn into EV-related technologies.

Volkswagen is the third most popular EV manufacturer in the world, as in the first half of the year 2020 it sold 64,542 units (10% of market share).

BYD Co Ltd is a Chinese EV manufacturer founded in February 1995 and based in Shenzhen.

BYD's EVs ranked No.1 in global sales for six consecutive years (from 2014 to 2019). This EV manufacturer aims to develop electric vehicles that are intelligent and connected.

The experts predict rapid changes in 2021 in the motor industry as the sales of zero-emission EVs are rising.

Even though diesel car ownership in Ireland is still ten times higher than electric vehicle ownership, sales of electric cars could double this year as a result of Irish laws on climate action and ongoing EU regulations. Thus, the automotive industry aims at meeting the increased demand for low carbon emission cars.

More and more people choose to go electric as EV models are not only more sustainable, but also cheaper to run and maintain. Electric car manufacturers are designing and launching new modern, more functional and futuristic with better battery range.

In addition to that electric chargers become more affordable, EV charging stations network is growing, so electric car charging is not an issue anymore.

However, this year due to uncertainty prompted by Brexit and COVID, the car market decreased by 18%, whereas the electric vehicle segment increased by 9.99%.

The most popular electric vehicles in Ireland in 2020 were Nissan Leaf, Hyundai Kona and Tesla Model 3.

The Tesla Model 3 is more affordable compared to the Model S and X. Nevertheless, it delivers a driving range of between 400 to 560km. The ride quality is good, and its on-road behaviour is decent, too.

Autopilot mode can be useful in certain situations. Its minimalist interior has almost no physical buttons. Practically, every onboard system can be controlled via display. After the Tesla experience, you will find every vehicle archaic.

The European version of the Model 3 features the more available CCS type electric charger connection. It allows the owners to make use of the growing network of rapid EV charging stations together with Tesla’s Supercharger electric car charging network.

In 2021 Tesla was the number one manufacturer in Ireland in terms of sales.

In 2020 Hyundai was the second best-selling manufacturer in Ireland (around 700 units sold by December 2020). This year it ranks the same, even though showing modest numbers since the beginning of the year.

This model is competing with the Nissan Leaf for the title of Ireland’s best-selling electric car. It is expensive as prices for this model start at €38,000. The Kona Electric is decent to drive and suggests a great driving range. However, the interior seems smaller and cheaper than it could have been for this price.

The Nissan LEAF is still one of the leaders in the Irish market among plug-in models. The price starts at around €30,000 for the basic 40kWh version, which is a decent choice. The 'big battery' version seems not worth it as it is quite short-ranged (270-360km). The interior doesn’t look that modern. It feels rather old-fashioned.

There are more than 1 billion cars on the world’s roads. In Ireland, there are about 18,000 electric vehicles. People are still concerned about the driving range limits, the cost and the inconvenience of electric car charging.

The availability of working and reliable charging stations might also be an issue. Even though home-installed electric chargers are easy to get, there is a growing demand for public EV charging stations as electric vehicles cannot go very far on a single charge.

Here is the list of top electric charger companies in the world:

This company manages the largest network of electric charging stations in the world. Its public and private stations are located across the US, Canada, Mexico, and many other countries.

ABB is one of the biggest industrial robot manufacturers in the world, a much larger part of its business being power generation equipment.

Even though it seems like the shift to the EV sector will negatively affect the fossil fuels sector, BP might be the largest provider of EV charging stations in the UK via its ChargeMaster subsidiary.

Another energy giant ready to be a part of the electric car charging market. To do so, Shell acquired the GreenLots business unit.

Webasto is a technology company suggesting both home and on-the-road charging solutions.

In order to develop a wireless electric vehicle charging system, Hyundai has partnered with Kia. Another innovation created by Hyundai is a solar charging system so that the solar panel is integrated into the roof of the vehicle.

Daimler is partnering not only with RWE but with EnBW and NewMotion in an attempt to create an ecosystem in which they will flourish.

Europe’s largest engineering company has demonstrated a number of charging solutions, for both home and public roads, for standard as well as fast charging.

EVgo manages the largest network of public fast-charging stations in the United States.

EVBox is another company that may be operating the world’s largest network of electric car charging points. Moreover, this company suggests a range of hardware and software solutions, including home and public chargers.

G2Mobility develops charging points as well as an EV ecosystem.

Pacific Gas and Electric is another traditional fuel merchant edging into the clean energy space.

Blink was once predicted to become the biggest company in the market. Currently, it has installed about 15,000 charging stations in the US and has about 150,000 registered members.

Schneider Electric is known for its data centre solutions, but it also offers a range of electric car charging solutions for home and public applications.

Efacec is a Portuguese company, producing 'quick charging' and 'ultrafast charging' electric vehicle charging stations for private and public use.

Its electric car charging stations designed for home and commercial use, although this company also offers customized solutions.

This brand-new startup develops smart battery technology and plans to create an autonomous mobile robot to charge the EVs.

Electric cars are considered the new normal. Many players (existing and new) of the automotive industry are designing new electric cars, and advancing features and long-range of their vehicles.

The best-selling electric cars are made by such companies as Tesla, BYD, Volkswagen, Renault/Nissan and Hyundai/Kia groups.

While conventional market leaders have to change their business model or create new alliances to compete with other manufacturers, new modern EV manufacturers have some advantage of not having to adapt their existing business to new conditions. It might be one of the reasons why Tesla still dominates the market and continue to be the biggest electric vehicle manufacturer in the world.