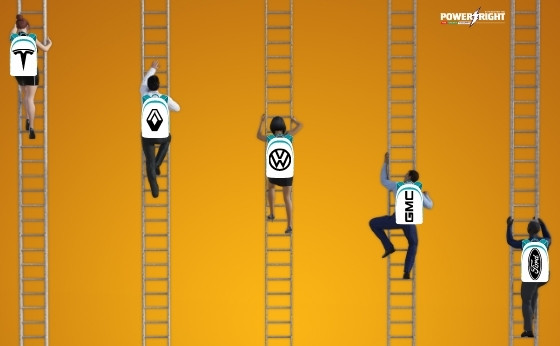 Battery electric vehicles (BEVs) are growing in popularity across the globe as automakers compete against each other and entice their potential buyers with new electric models. Many countries in Europe offer generous incentives, including electric vehicle purchase subsidies, tax exemptions and grants for installing a home car charger.

Other factors which speed up the transition are developing infrastructure of public charging stations and increasing availability of EV charging at work.

Tesla still remains the leader in the luxury EV space while big automakers, such as Renault, Peugeot, Volkswagen, General Motors and Ford, focus on developing affordable EVs that could compete on price with traditional petrol and diesel cars. Some automakers have announced massive investment plans in the electric cars segment.

General Motors plans to launch 30 new electric models globally by 2025. Volkswagen, the second-largest manufacturer of cars globally, plans to build EV battery factories in Europe and establish a charging station network. The company expects EVs to account for about 50% of all sales by 2030.

As the competition is growing, BEV automakers have to face and solve some complex tasks:

Battery technology is improving, and auto manufactures invest large amounts of money into innovative start-ups in this field.  Not only do scientists try to decrease the cost of the lithium-ion battery, but also there are attempts to develop various innovative products such as sodium-ion and solid-state batteries.

Sodium-ion batteries will not be more powerful than lithium-ion ones, but they could cost from 30% to 50% less than the cheapest EV battery currently available. What is more, they have a greater life span and run better at cool temperatures. EV charging up to 80% will take 15 minutes.

Solid-state batteries are the power units we use in RFID and wearable devices. Scaling up the production of these power units is very expensive right now. Nonetheless, the benefits of using solid-state batteries are improved safety, stability and size. Thus, EV owners will be able to top up their vehicles much faster using either home car chargers or public charging stations.

Many EV owners experience “range anxiety” even though the range of EV batteries has significantly improved. Most of them have to use home car chargers to fuel their vehicles. Even though Ireland gained a "4" ranking in the Energy Transition Readiness Index 2021 ("1" meaning the least and "5" meaning the most transition ready), most of its public charging stations are located in urban areas.

While EV grants and tax incentives are helping tackle EV’s price premium at the moment, auto manufacturers have to price electric models at the same level as traditional ones to compete long term.

The crucial elements of the EV ownership experience are safety, design, comfort and acceleration. Consumers expect at least the standard tech features: easy to use and reliable infotainment and navigation systems, rearview camera, smartphone app control, USB ports and outlets.

One of the most exciting trends that ever happened within the automotive world is electrification. Leading EV manufacturers strive to provide innovative solutions to improve safety, battery performance and driving range while keeping the prices affordable and comparable to ICE vehicles. Advances in modern technology offer a clear path to go electric and achieve the climate change goals.